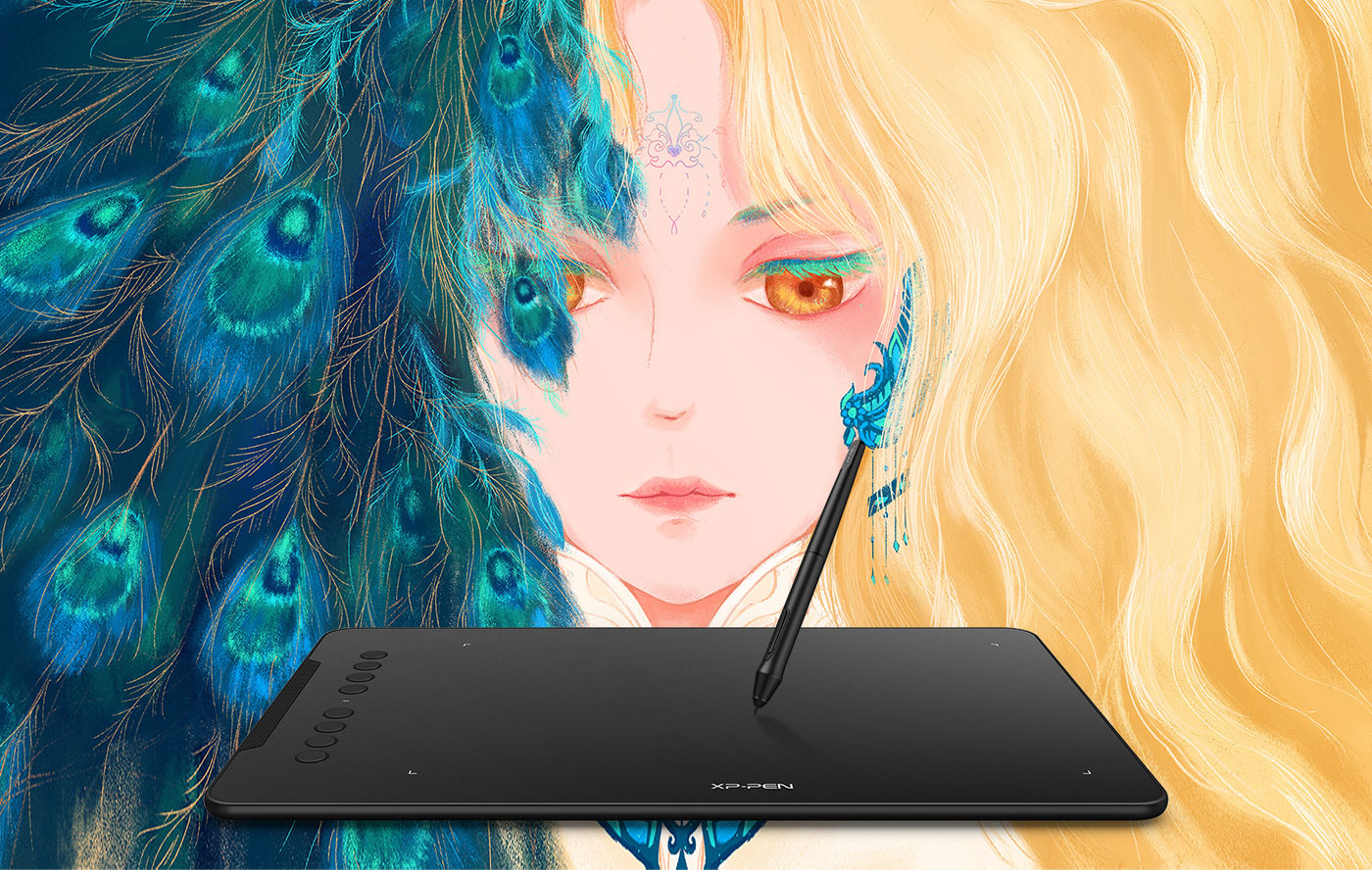 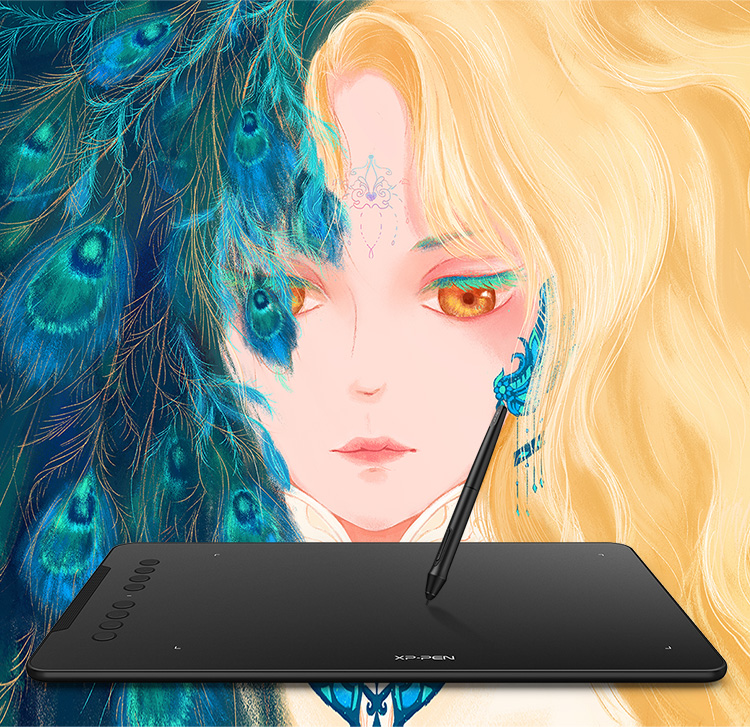 Time to decorate your life! 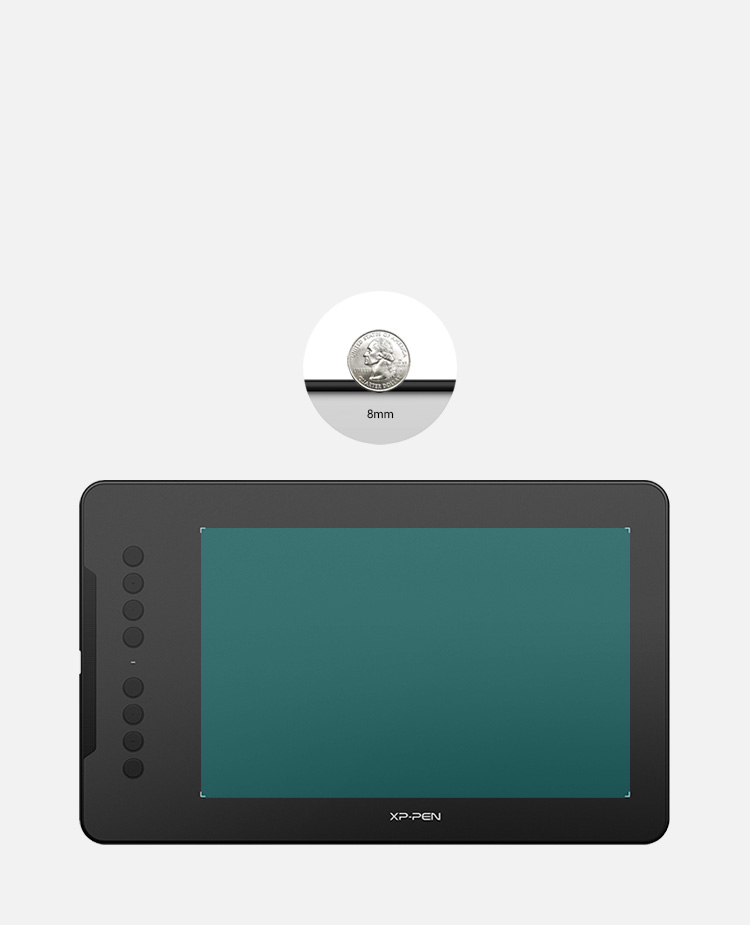 The Deco 01 V2’s expansive tablet is big and brilliant! It comes with a 10 x 6.25 inch working area so you have more space to create and get work done. But at only 8mm thick, you can take it anywhere without the burden of lugging around a heavy tablet! 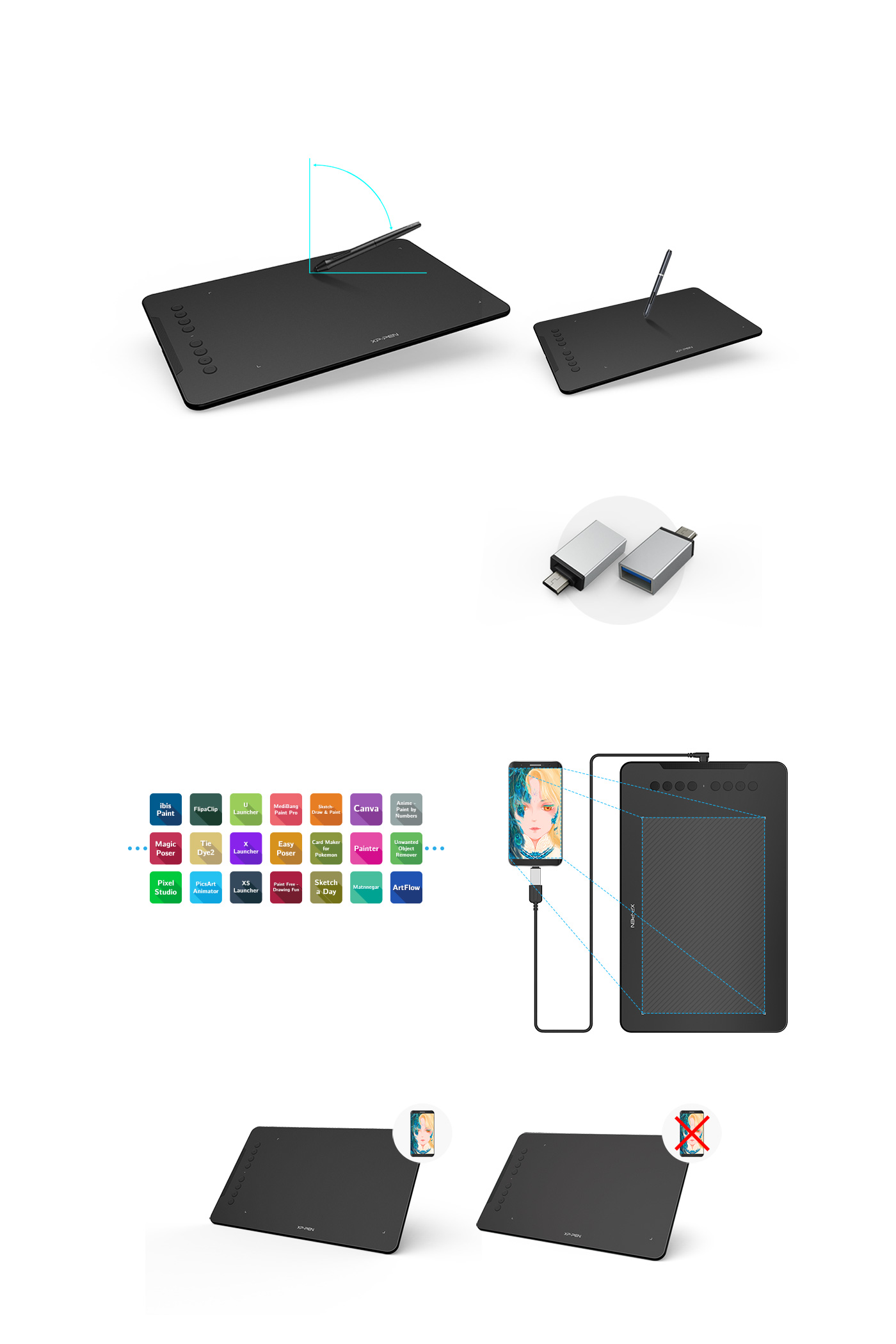 The stylus supports up to 60 degrees of tilt brush effect and delivers smoother and more natural lines and strokes, while also giving you the ability to add shading to your creation and offering a more natural writing and drawing experience.

The XPPen Deco 01 V2 supports connections with Android devices 6.0 and above. It works with most major software including: ibis Paint X, FlipaClip, Medibang, Autodesk Sketchbook, Zenbrush, Artrage, and more, bringing you an all new creative experience with extreme portability and potential.

Deco 01 is not compatible with Android devices 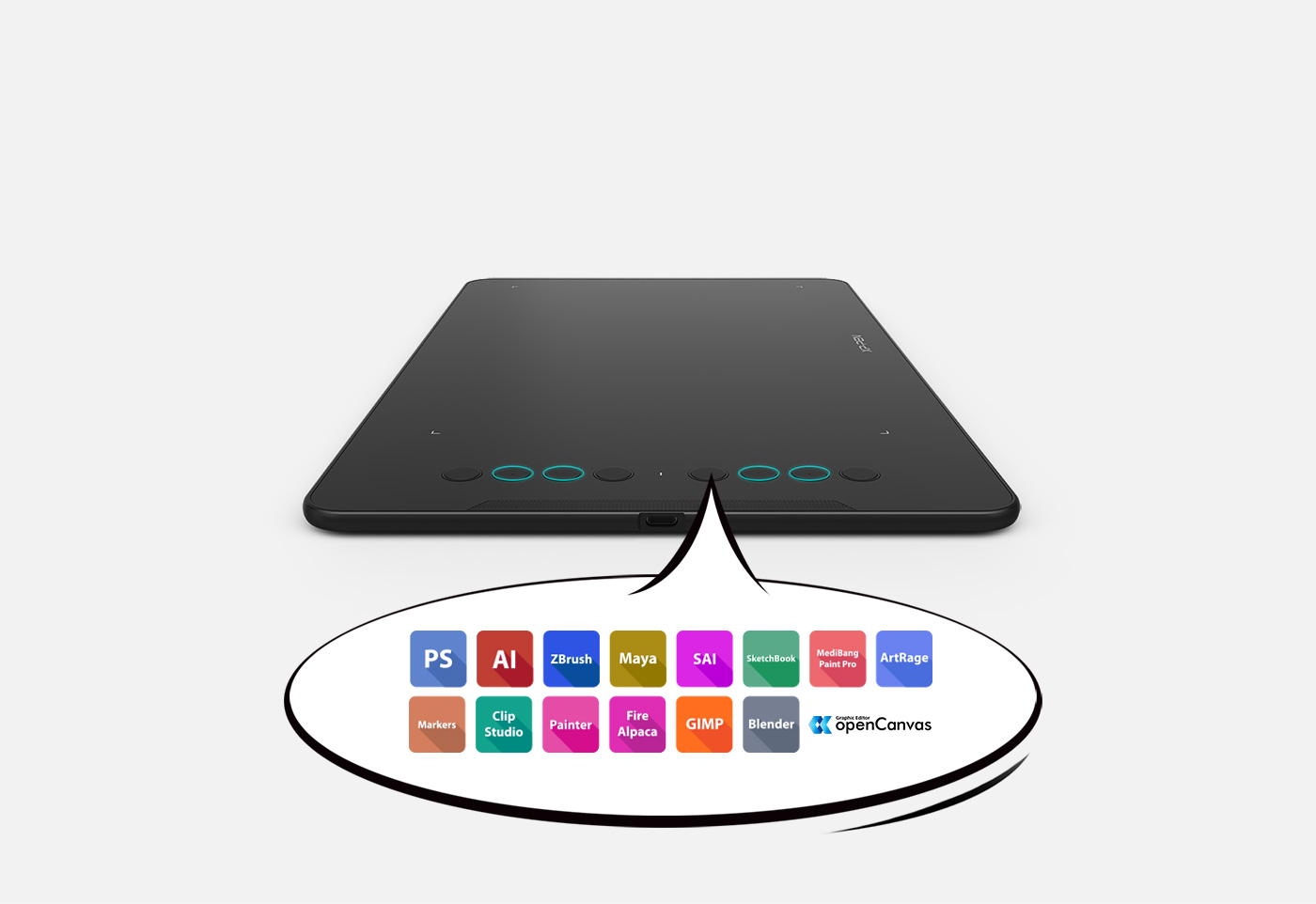 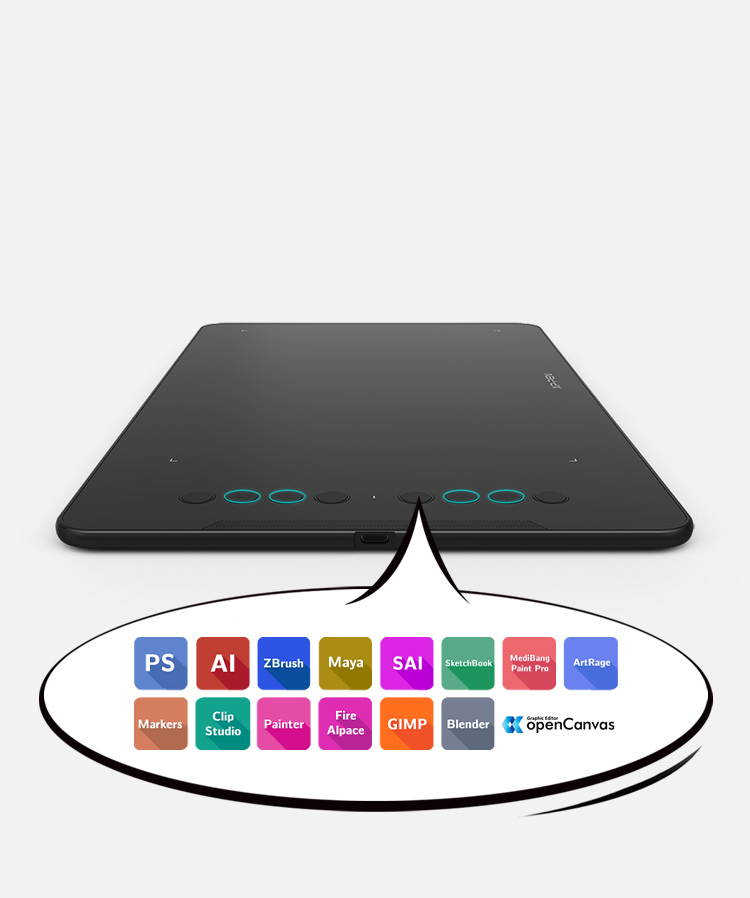 The Deco features eight, round, customizable express keys that fit easily to your fingertips. With its blind spot reduction design, you can find the position of your express keys efficiently and the shortcut keys can be programmed to many different software programs. 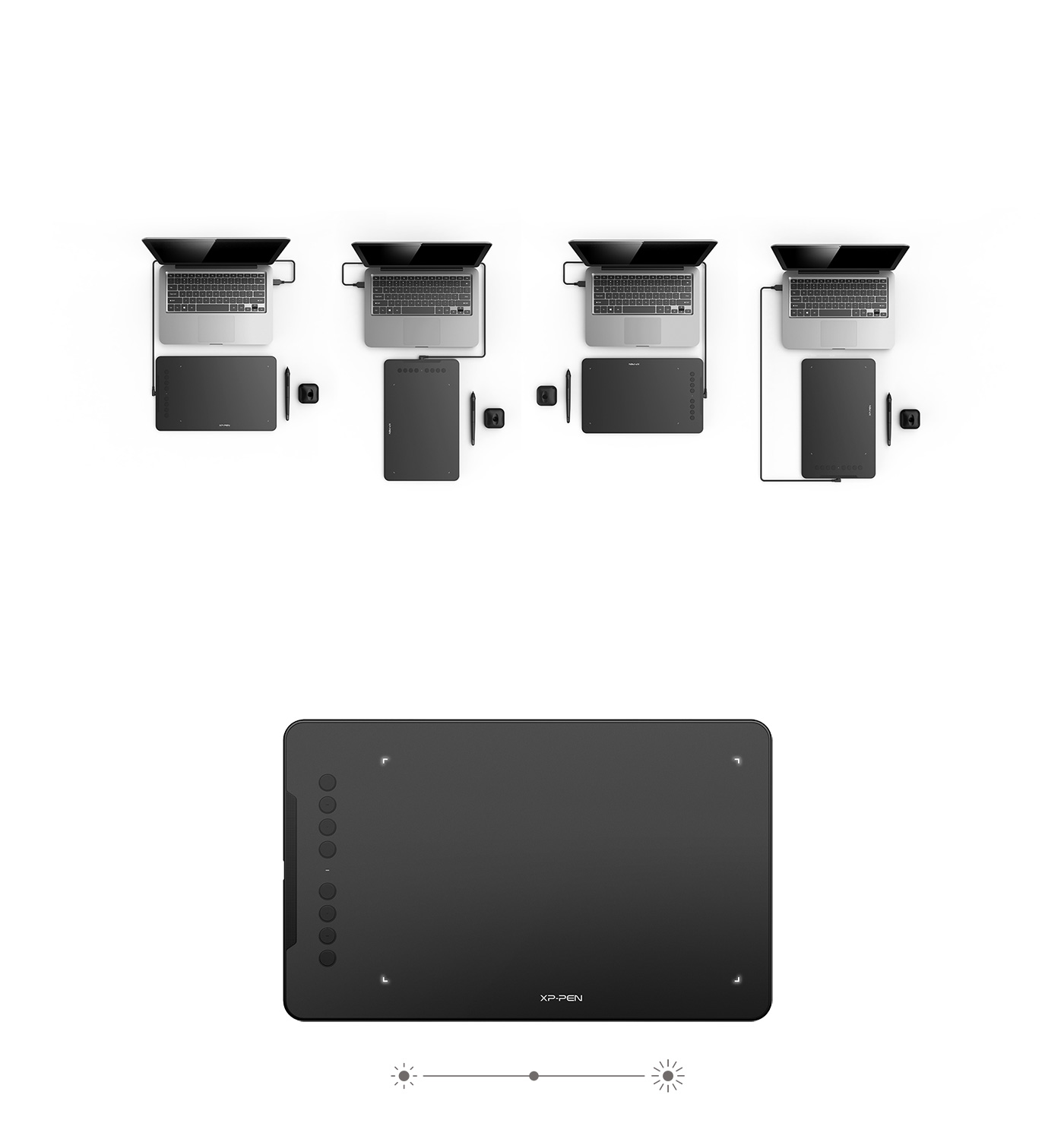 Inspire with a glimmer.

The Deco 01 V2 lights up at the ends of the drawing area, and comes with adjustable brightness levels, so you can work and create in your preferred lighting environment. 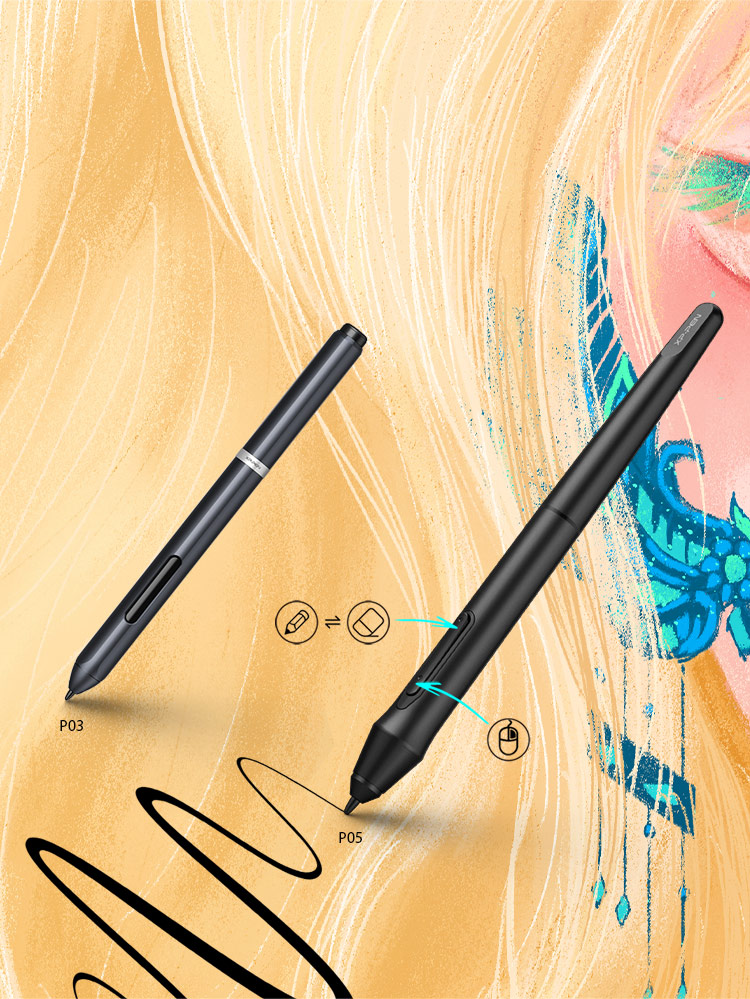 A free and articulate stylus pen.

The stylus works just like a real pen, no battery and no charging required! The stylus is true-to-life with 8,192 levels of pressure sensitivity, giving it the intelligence to modify, navigate and create with a full pallet of brush and pens. 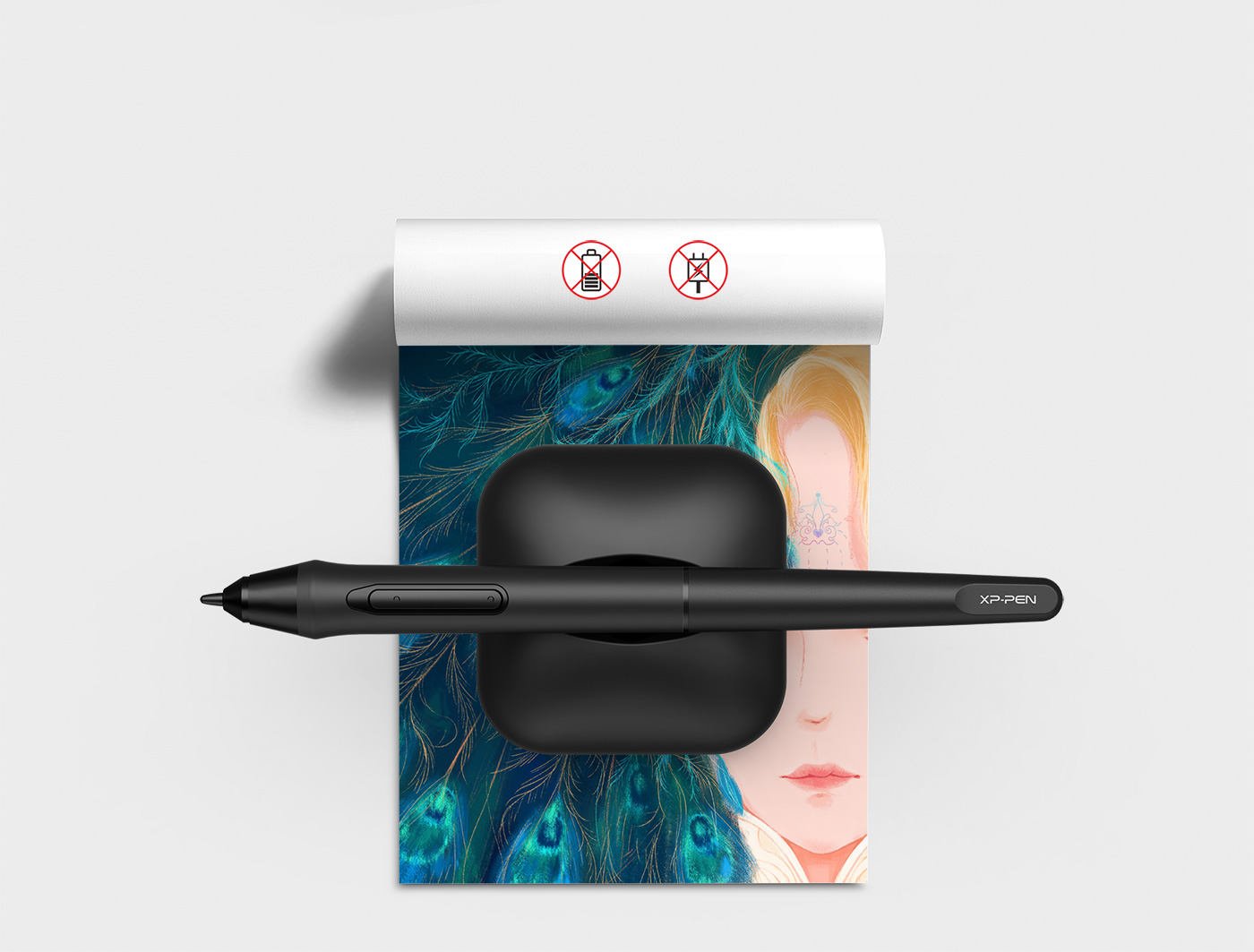 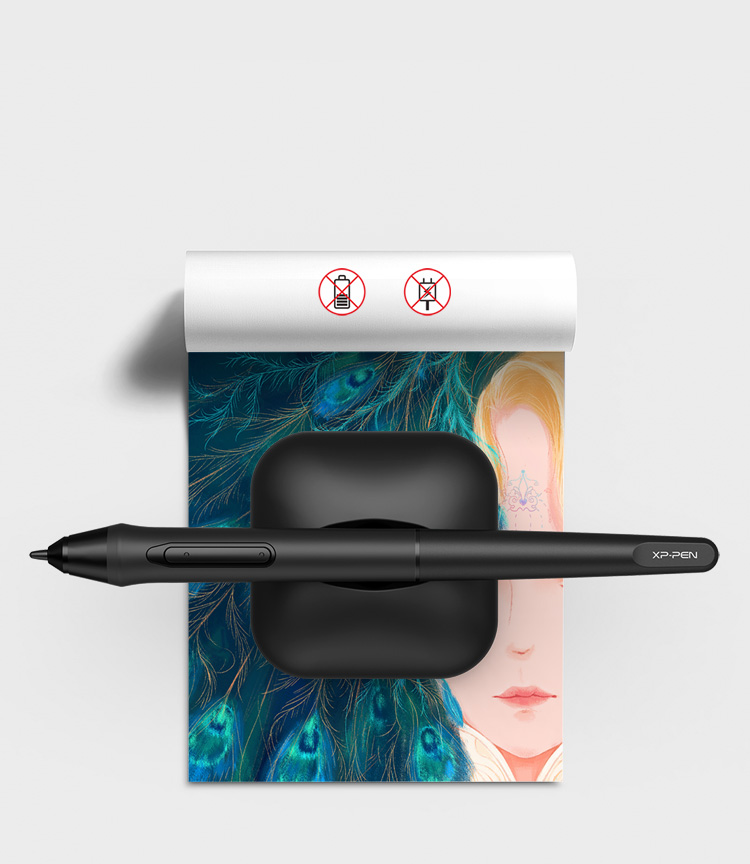 The stylus works just like a real pen, no battery and no charging required!

Work faster on a tablet.

Sketch, paint, design, and edit photos on your tablet. A unit powerful enough to help you take your ideas even further.

Ideal for your web conferencing or distance learning.

Engage, inspire, and immerse students and attendees like never before.

Teachers and speakers can create and explain interactive content visually by writing, editing, and annotating directly in files and sharing their screen in real time while streaming, broadcasting, or web conferencing. This flexibility allows the flow of creative ideas and the problem-solving process to be presented intuitively and efficiently.

You can now use Chrome OS on your XPPen Deco 01 V2, allowing you to write and create digitally effortlessly. You can then share and collaborate with teachers and classmates, creating an interactive class atmosphere even in a virtual learning environment. The stylus offers the functionality of a standard mouse, meaning that you can write, edit, draw and navigate on your Chromebook with ease.

Compatible with most Operating Systems and applications.

*If you have any further queries, please do not hesitate to contact us at service@xp-pen.com.

Deco 01 V2 comes with additional accessories like scratch guard and drawing glove which is not present in Star 03. Also, Star 03 does not support Android whereas Deco 01 V2 does

Deco 01 V2 tablet is compatible with majorly all the designer software such as Photoshop®, SAI®, Painter®, Illustrator®, etc as well as online teaching software like Zoom, Microsoft Teams, WebEx etc

Yes, you can check our Deco 01 V2 which is one of our most loved pen tablets under 10000. It has a working area of 10x6 inches, comes with features like Android compatibility, Tilt Support and 8 Shortcut Keys. The package also includes a glove and scratch guard.

Yes, all the left hand users can use our Deco 01 V2 Tablet comfortably. All you have to do is install the driver and rotate 360 degrees on the driver settings.

Wonderful tablet
A wonderful tablet in affordable price. works great with any drawing or illustration tools,
I was bit hesitant initially to go with this brand as its new in this market, and worried about customer service also, but I assure you that you will get very good customer service from the company even though they have limited centers in India. here are the few plus points i say,
1) great design & very less weighted
2) wireless/battery free passive pen (doesnt need to charge or connect thru wire) Great advantage
3) 8192 of pressure points which is very good
4) large active drawing area and many more
I have been using from last few days, working great, I had a small issue with its driver and contacted the company and they responded me very well, and sorted out the issue.
so if you are a beginner go and grab it and enjoy Drawing..


Thanks for the kind words! Glad you like the product

Hey guys its been 4 years I am using this tablet, started as a beginner and still using it for professional work! I can say this is the best product for all levels of graphic work to do. Many of you who have read my review have messaged me personally to ask my experience with it after 4 years, so to save your time here is an updated opinion of mine! I have changed the nib only once after 1-2 years of use, and it provides you more nibs for the long run so yeah its a very good and long term product! Make sure you get the protective scratch guard in the box, if not check with XP pen on their website. (I have recommended many people this product, unfortunately not everyone received the scratch guard for Deco 01 v1, not sure about Deco01 V2)

My Instagram is @raydeoactive most of my work is done using Deco 01 v1! Deco 01 V2 has more features but never felt the need to upgrade from Deco 01 v1.

We're glad you love the Deco 01! Thanks for the feedback :) Do reach out to us incase you are looking to upgrade your tablet in the future

Nice product
Writing on it is very smooth

Which pen model is used in this? And can I replace the pen or buy a new one if it gets damaged?

P05 pen model is used with Deco 01 V2. We have 1-year replacement policy so your pen can be replaced if not working. You can also purchase a new one from the stylus section.